skip to main | skip to sidebar


KICKED OUT OF DEATH

at THE CHOCOLATE FACTORY

Kicked Out Of Death, pre-face KICKED OUT OF DEATH is a two man work – a folie à deux – written, directed and performed by Peter Jacobs and MKS Volcofsky, playing collectively as Père Another.

It is possible, having been ‘KICKED OUT’, that they are now trying to get back in, to the particular. “Are you dead?” one asks the other.

A theater event between men having been thrown into the world and the fraternity of strangers, the play and its narrative is borne upon their bodies, as their bodies are inseverably welded to the play; inside their play space, a 4x8 ft. sheet of galvanized aluminum acts as a stage within the stage, a shifting esthetic trashground of a few exhausted objects, relics of a life of work and learning and food, the hint of another world beneath their feet. One wants what the other has; the other wants what’s missing.
The two are violated by language and use it as bait and weapon and toy; objects are misnamed, and the MEANING of things becomes a postmortal struggle of hilarity and humiliation. Anger, a vile meal, and often their only food. They are haunted by the feminine which here exists only in words or in the disembodied trappings of what is apparently ‘female’.

Tribal affiliations emerge: these two are Jews, of no congregation but each other. Their confined nomadism takes on an historical tinge, contemporary and otherwise. Shoes are extremely important to them. These two men exist step by step. Hyper-specific actions are taken, hyper-specific words are spoken: abuse, love, rage, support, subservience, celebration, robbery and abandonment. In this container of ‘aftermath’ this specificity is elevated to the tension of ritual – with its autonomous brutality of repetition and otherworldly logic –and the meaning of what is happening seems simultaneously apparent and teetering.

The genesis of this collaborative work was in large part Jacobs’ encounter with Volcofsky’s visual art – three charcoal drawings on paper in particular. In them Jacobs saw an isolation, grieving, masculinity, vulnerability, depression, and a relationship to the feminine to which he related strongly – emotional themes and landscapes he had been exploring in his own work. The two decided to collaborate, and the visual art became a map for the work. Through months of improvisation this piece has emerged, with some text written individually.

A common drive the two recognized in each other’s work is the desire to invest catastrophic intellectualism, isolation & self-obsession with (a return to) intimacy and the body; particularly to explore the emotional male body in relational theatrical space, a feeling male body not made ‘safe’ by either marginalization (grotesquery) or categorical normalization – either homo- or hetero- centric. Something otherwise.
Neither melodrama nor sheer display of virtuosic mind-prowess; and not ‘performance art’, which too often is a performer’s therapy at the audience’s expense, too self-referential or -indulgent and often depositing the illness of the performer into the soiled laps of the audience.
And yet we are convinced of the healing aspect of art. KICKED OUT OF DEATH is a work that entertains as it guts itself, its text, its own claims, its desire for mastery, laughing all the while, knowing it is doing a maypoleish dance around the panopticon inside.


Peter Jacobs produced and conceived the site specific performance For A Private House for the 2005 Movement Research Festival. Since 1997 he has collaborated extensively with choreographer DD Dorvillier, writing plays for dancers: Die flasche ist ganz leer (1999), Wind (2001), and Coming Out of the Night With Names (2004) all choreographed by Dorvillier. He was the dramaturge on Dorvillier's Bessie Award winning Dressed For Floating (2002). He was Artistic Co-Director for Chashama Inc. (1995-1997, which he co-founded in 1995) and a founding member of Reza Abdoh’s Dar A Luz company. On stage he has performed leading roles in the work of Reza Abdoh, Richard Foreman, The Builders Association, Gale Gates et al, and made his opera debut in 2006 singing the role of Giraffier in Les Deux Aveugles, presented at Summerscape at The Fisher Center for the Performing Arts. He’s featured in the films The Blind Owl directed by Reza Abdoh, and Philadelphia directed by Jonathan Demme. A MacDowell Colony Fellow, his work has been supported by The Jerome Foundation, The James E. Robison Foundation, The Rockefeller Foundation MAP Fund, and The NEA.

MKS Volcofsky has been writing, directing, designing & performing his original theater work since 1995. Works include his plays Surrepetition (New School, 1995), Sap (Atrium Theater, NY, 1996), MINE, BlackBox (both at Williamsburg Art & Historical Society, 1997), Holy Wa(te)r (with Karmenlara Seidman at HERE’s T.H.A.W. festival, 2002), Shivah/Proper (Williamsburg Art Nexus 2003 & NY International Fringe Festival 2004), and Stickfigure (National Museum, Port of Spain, Trinidad & Tobago 2004). His video works Shivah & Snow Vein were seen in ’05, ’06 & ’07's Festival Mau in Lisbon & Faro, Portugal. His first solo performance Fur Egg was seen in August ’07 as part of the Nomadic New York festival, commissioned for and curated by Andrè Lepecki, for the re-opening of the House of World Cultures, Berlin. He has twice received Albee Award Fellowships, for both playwrighting and prose. His drawing & painting is in private collections and has been seen in shows in the LES, Williamsburg & Tokyo, and will be seen in Berlin in late ’08. He is the founder & sole proprietor of A’ Traveling Yeshiva Sideshow, a roaming silo of original plays, prose, pictures and clothes. www.atravelingyeshivasideshow.com

NOTE FROM MKSV: I work under the nom-de-mort VOLCOFSKY; this would have been my surname had my paternal great-grandfather not been killed in a coal mine explosion in Delaware at the turn of the 20th century. A new immigrant, he’d left his tin-smith artisanship behind in Gallicia, became an American laborer, and died, leaving behind his young wife and 2 year old son. They returned to NYC, in poverty. His son, my grandfather, later shed the name. I’ve unburied it. Fatherlessness, which to me is an essential element of Judaism (along with bearing the rubble of temples/tablets within ourselves, as ourselves), blows through my work like a disaster ash tidalwave through a city street. KICKED OUT OF DEATH is rich with it.

Thank You Benefitters, Now On With The Show 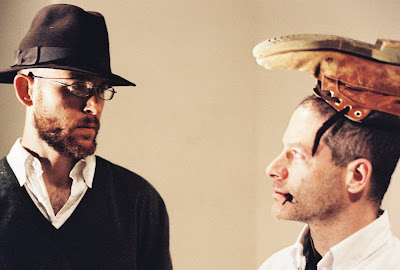 PÈRE ANOTHER enacts
KICKED OUT OF DEATH
at THE CHOCOLATE FACTORY

WRITTEN, DIRECTED & PERFORMED by
PETER JACOBS & MKS VOLCOFSKY
Posted by Mathilda Hawthorne at 1:32 AM No comments:

M's email asks for more details about the benefit

mr. jacobs, please explain this event to me bit - i am indeed curious - boats and all
best,
M
Hi M,
There will be a fantastic installation in my basement - a multi colored plastic chamber, containing men(including myself, women too if any sign on, but none have yet) and old wood, a small fire... in the act of woodworking with a twist i.e. wilderness, religiosity, nakedness - building a boat, whether or not it will float...? Only one viewer at a time will be let down to see, in gradual intervals throughout the night. There will be a camera inside the chamber set to be used by the viewer with a trigger release. The viewer doesn't hold the camera. The viewer will take a picture of his/her self along with whatever action of the woodworkers is in the frame. We're also working with an idea about having the viewer cast a vote - by giving them a choice of trigger buttons, but we're still figuring that out. The picture image will be sent to the above floors, viewed on a screen of some kind. Upstairs there will be food, live music & performance, discourse. The only way to keep up on what's happening in the basement will be to have people going down and sending images up. Also, upon arrival, guests will be asked if they want to work on the boat and really get down.
Hope you can make it.
Peter
indeed. sounds interesting.
M
Posted by Peter Jacobs at 1:32 PM 1 comment: 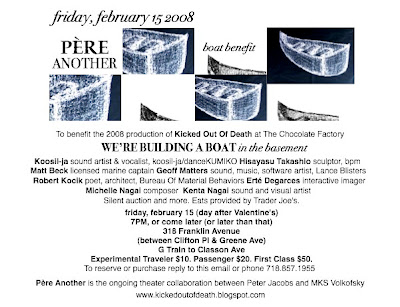 WE'RE BUILDING A BOAT in the basement

To reserve or purchase write to idiodiaspora[at]verizon[dot]net or call
718.857.1955

Pére Another is the ongoing theater collaboration between Peter Jacobs & MKS Volcofsky
Posted by Mathilda Hawthorne at 1:50 PM No comments: